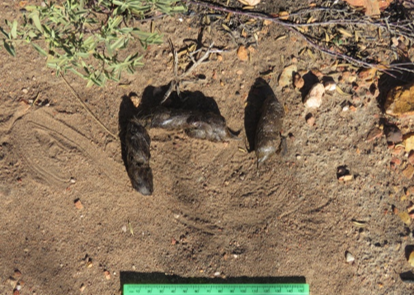 Have you ever read Nature’s newspaper, Nature News, (or, in modern times, visited Nature’s Facebook page!)? Although these news reports are not written in words, ‘literacy’ (the ability to interpret Nature’s sign language) is required to make sense of the script and get updated regarding the latest newsworthy events! Allow me to explain…

Sightings of illusive animals such as leopard, brown hyena, aardwolf, African wildcat, genet, aardvark and porcupine are not common occurrences. In this regard the Klein Karoo is no exception – relatively few people have ever seen a leopard, an aardvark or an aardwolf in the area. Sightings of porcupine, African wildcat and genet are somewhat more common, and as regards brown hyena, very few people are even aware of the fact that the animal does occur in the Klein Karoo.

All these creatures, however, leave signs of their presence and activities, such as tracks, scat, lairs and feeding signs. Finding and interpreting (reading!) such signs (news flashes!) require an interpretative mind, knowledge and a ‘trained eye’. Being able to do that yourself or having these signs interpreted by an experienced guide is a most satisfying experience.

A few days ago when stopping to open a gate in a remote area at Minwater we found large canine-like tracks on the trail. Scrutiny of this ‘news flash’ disclosed the fact that a brown hyena had also used the trail recently! 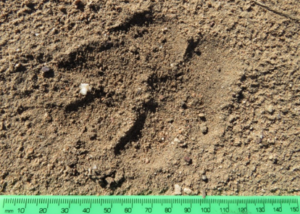 About two kilometres further (turning to page 2) we noticed more big tracks in a sandy patch on an animal trail intersecting the trail we were driving on. ‘Reading’ this ‘report’ revealed that those had been left by a leopard. Adjacent we also found the tracks of an African wild cat, which had followed the same trail. Although of the same shape, the contrast in size had us once again filled with wonder! 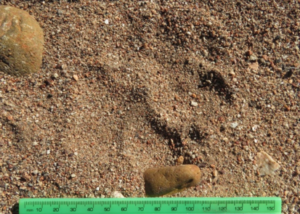 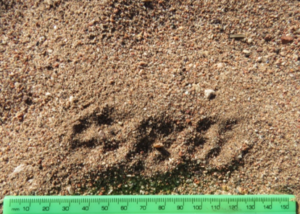 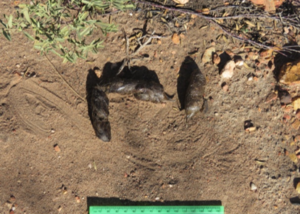 Scratch marks on the ground where the leopard marked his territory by spraying urine on vegetation, 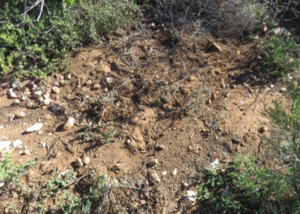 And clear indications that a genet had raided the burrow of rodents! 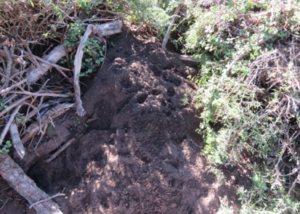 In the next post we will ‘be reading a few more pages’!