Guidelines for the Identification of Birds: Step 6 – Behaviour 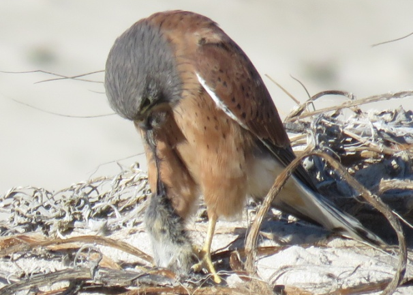 This sixth step in the recommended guidelines to identify unknown birds is not in the last position because it is least important. Quite often neglecting this exercise can make the task of identifying a bird very difficult! And those of you who’ve been to visit or attended one of my talks, know how much I enjoy telling stories from nature.

Step six: The behaviour of the bird

While observing a bird to be identified, also pay attention to its behaviour, e.g.: 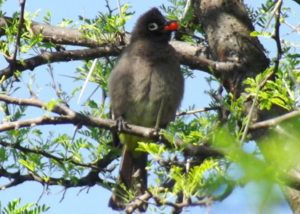 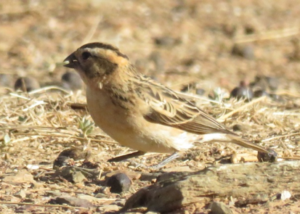 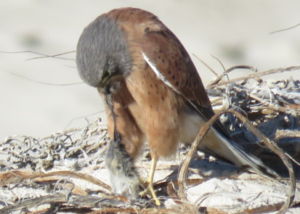 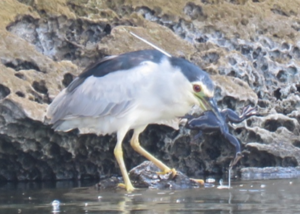 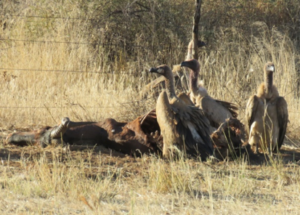 Was it flying? If so, did you notice anything remarkable about the way it was flying?

An experience I had in Perth, Australia, is a good illustration of the relevance of this aspect. I was part of a group walking down a street in one of the suburbs when several hundred metres in front of us a greyish bird flew across the street towards a tree. Some members of the group were wondering which bird it was. But, apart from the general colour, it was impossible to make out any identifying features of the bird because of the distance and flying speed. However, based on the manner in which the bird was flying, I told them that I had no idea of the species, but that it had flown like a dove or pigeon. When we eventually arrived at the tree, the bird, an unfamiliar dove, was still there.

Observing birds in flight you will find that other species and groups of birds also have characteristic ways of flying. For instance:

The seemingly erratic wing beat of the Hadeda Ibis, 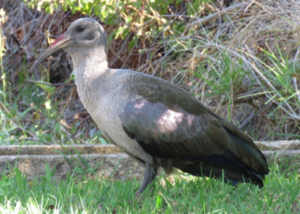 The initial rapid wing beat of spurfowl and francolins, terminating in a glide before landing on the ground, 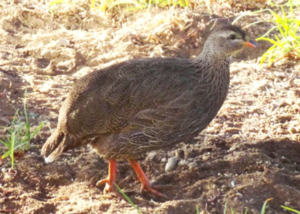 The prr-prr sound of a sunbird in flight due to a rapid wing beat, in bursts, 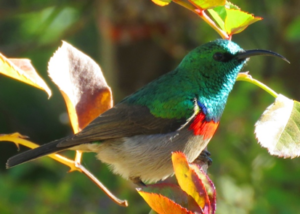 The relatively quick up and down clamorous flight of the Southern Black Korhaan (Swartvlerkkorhaan), very often emptying the bowels as soon as it has achieved some altitude, which gave rise to an Afrikaans name, “Skytgatkorhaan”! 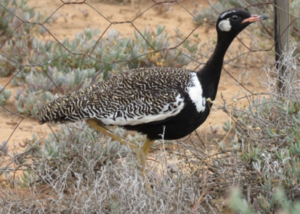 If on the ground, what was remarkable about the gait of the bird? Was it e.g.: 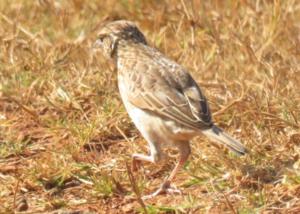 Or was it hopping like a weaver or sparrow? 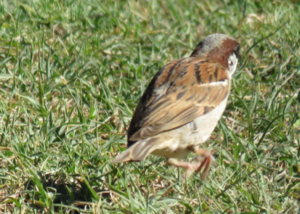 Did you notice any other repeated activity or act which could be regarded as a habit/mannerism? Apart from the aspects already mentioned, many species and groups of birds exhibit characteristic habits and behaviour, which, quite often, can be detected from a distance too great to register other features, e.g.:

The African Darter has no oil gland to waterproof the feathers, and as a consequence the feathers get soaked when diving after fish and other food items. Afterwards, to dry out, the African Darter suns itself with the wings widespread. To a lesser extent, this behaviour is also shared by cormorants. 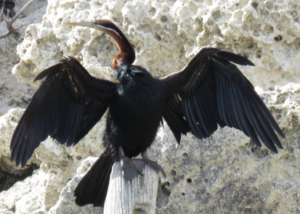 Wagtails move the tail up and down when they stop. 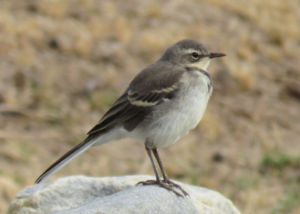 Some chats, e.g.  Familiar, Karoo and Sickle-winged Chats flash their wings when they have moved. 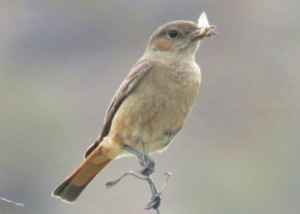 Quite often the habits and behaviour of a bird can be a dead giveaway as to the group, and even the species!